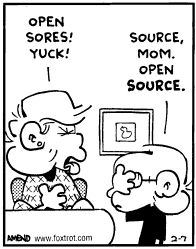 The silence for the last few months has been because my life got crazy.  I’ve been spending a lot of time working and what hasn’t been working has been spent in preparation for our new baby.  Yes, thats right, baby.  In 2006 we were told by a fertility doctor that we would likely never have kids.  We didn’t figure it out until less than a week before Jessica entered the second trimester.  So thats been consuming all of my weekends getting the nursery (strange calling it that) and the rest of the house ready for the new baby.

I’ll still try to update as time permits on the Myth setup as I have had time to work on it, just not write about it.

That brings us to the next topic I wanted to blurb about.

Over the last 15 years, I’ve written quite a bit of code.  When I sold my ISP business a few years back, I retained all of the rights to the source code.  I haven’t really done much with the code lately, but the need to update at least some of it became pressing over the last few weeks.  That being said, I decided to release my code under the GPL.

There are three big projects and two libraries that I’ll be releasing over the coming weeks.  The libraries have already been released and one of the projects.  I’ll talk more about those later, as well as provide some of the history of each of them here.  I’ve migrated them all to GitHub at https://github.com/gottafixthat.

These are my first “real” open source contributions in a very long time.  Back in the day I did add a bit to the Linux kernel (v1.x days) and had a bit of fame with the “Marc Lewis” MySQL patches to Cistron RADIUS (now FreeRADIUS), but haven’t contributed much lately.

The packages were all integral parts of my old business, but I’m not in that business any more.  I’m releasing them in the hopes that someone may find them useful.

I’ll talk about each of them more in future posts, and give histories.  Hopefully within the next week.