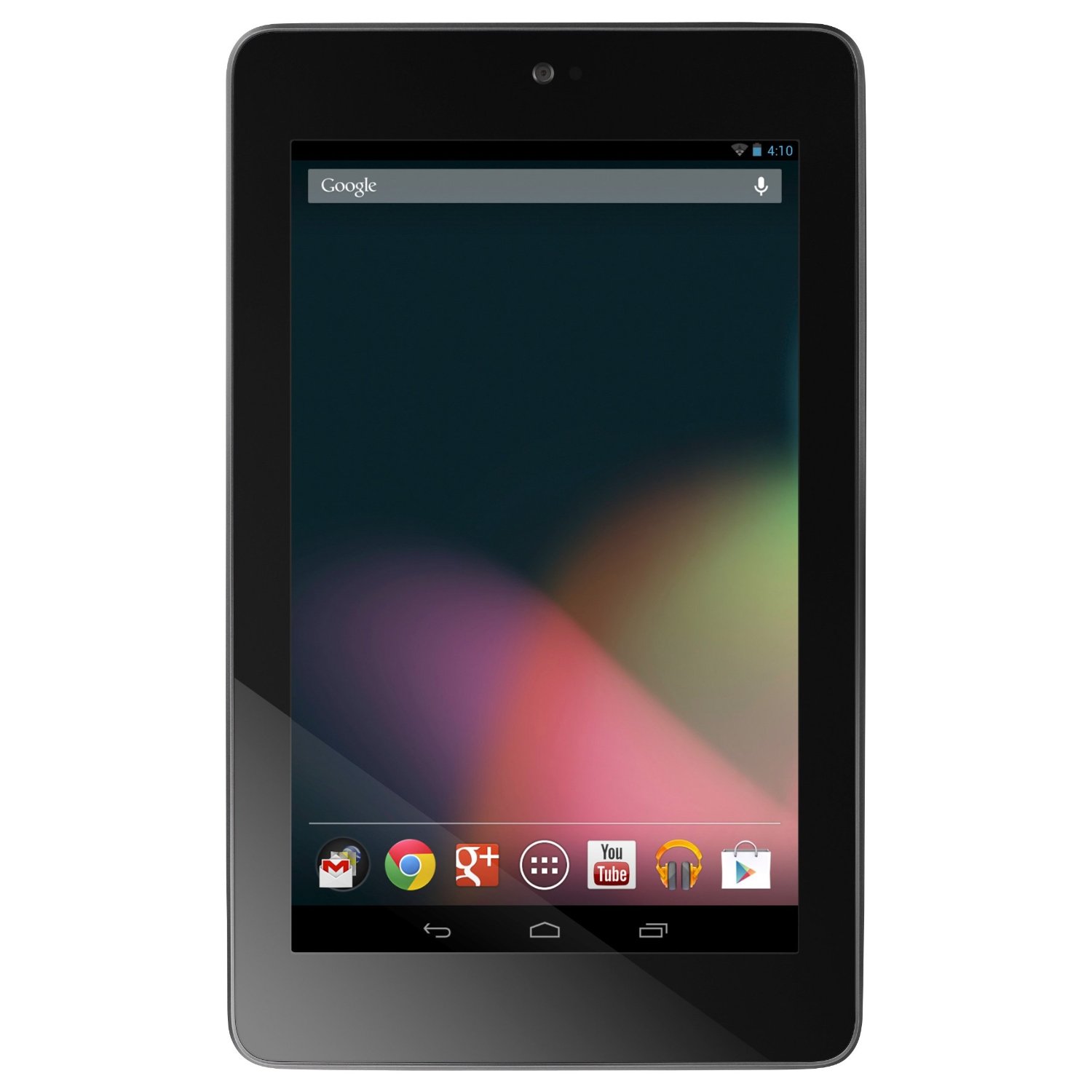 I’ve had a Galaxy Tab 7.0 Plus for about three and a half years.  Its been a great performer for me, and we’ve put it through a lot of abuse.  We used it for watching movies, checking email, keeping our (then) toddler entertained, writing documents, and all the other things that tablets are great for.  As one of the first generation Android tablets, it was pretty good.  Its most compelling feature for me was that it was 3G enabled, so I didn’t need WiFi.

Two years ago, Jessica got her first tablet, a Samsung Galaxy Tab 2.  It worked pretty well for her for a year or so.  Last year we bought Jessica a Nexus 7 (first gen) to replace her Galaxy Tab 2.  She loved it.  It was significantly faster, the screen was much more crisp than that of the Galaxy Tab 2,  and most importantly, no TouchWiz.  Since its a Nexus device, its received updates as Google has released them, unlike the Samsung, which has received just a single update since she got it.  She still uses the Nexus 7 quite regularly.

At about the same time, I bought myself a Nexus 10.  The Nexus 10 is a beast of a tablet.  As a companion to my 7.0 Plus it works pretty well.  Its great for multimedia and some games, but for a lot of things its just too big.  I might as well just use my laptop.  What convinced me to buy the Nexus 10 was the screen.  It is an amazing 2560×1440, which makes text very smooth and easy to read.  Photos are stunning and watching videos is great.

So, with that lack of information, and the general trend of tablet manufacturers to make things cheaper but not substantially better, I decided to buy a Nexus 7 2013 LTE (Nexus 7 from here on out) to replace my Galaxy Tab 7.0 Plus.

It may not make a lot of sense to a lot of people to buy a new tablet that was released over a year ago.  The specs most people look at aren’t all that impressive by this year’s standards, especially when compared to the latest phones.  There are also much cheaper options than the Nexus 7 out there that are arguably just as good or better spec-wise.

For me, though, there are several reasons that make the Nexus 7 a much better tablet than anything else out there right now:

The Nexus  7 has an amazing display at 1920×1200.  This gives it a pixel density of 323 pixels per inch.  This makes text incredibly smooth and easy to read.  It also provides much more detail on photos and can display an HD movie with no scaling or loss of quality.  I prefer the 16:10 aspect ratio over the 16:9 that most other tablets are using.  More pixels means more data displayed on a single screen and less flipping and scrolling.  Most other tablets, have a much lower resolution, such as 1024×600 or similar.  Even Samsung’s latest and greatest Galaxy Tab 4.0 only has a resolution of 1280×800.

I find it odd that the latest generation of “flagship” phones all have a higher resolution on much smaller screens.   Don’t get the wrong impression, I love the fact that my new LG G3 has a 2560×1440 display on it.  Its gorgeous.  Why aren’t tablets following suit?

I love my Nexus 10 for its display, front facing speakers and overall design.  The Nexus 7, however, is much more practical for many things.  Its very easy to hold in one hand for extended periods of time.  Anything bigger wouldn’t be as easy to hold.  Because of the 7″ display, things like photos, videos, Facebook, Google+, Flipboard, etc, are much easier to read than on a phone.  Add in the LTE connectivity on this model, and its usable almost anywhere, with or without WiFi.  If I were working on spreadsheets or word processing, I would use my Nexus 10, or more likely my laptop, but for things that don’t require a keyboard or a larger display, the 7″ form factor is much more practical.

Price is a bit of a sticky point on this one.  The Nexus 7 2013 LTE is certainly not the least expensive option out there.  At $350, it is considerably more expensive than almost any other 7″ Android tablet.  Without LTE, the 16GB version can be had for about $229, or the 32GB version for $269 directly from Google.  From Amazon the 32GB version can be had for $260.  Even at $350, though, its still about $130 less than the iPad Mini LTE, which comes in about $480.  There are very few tablets that have LTE connectivity right now, and fewer still with a 7″ form factor.  At $350, its among the least expensive of all of 3G/LTE tablets that do not require a contract.  And with T-Mobile’s new “free tablet data for life” promotion, it becomes even more cost effective.

Not the best, but not the worst.  From a full charge, it can run for 6 to 8 hours of active use.  When idle it doesn’t seem to drain very quickly, either.  I can still have a 95% charge 12 hours after its been unplugged from the charger.

This one could be problematic for some people.  The Nexus 7 LTE version has 32GB of storage space and is not expandable.  For those who like to keep lots of movies or music on their tablets, this would be a big limitation.  But with the availability of streaming over Netflix and all the other streaming services, I haven’t found this to be a major issue.  I’ve got dozens of apps on my Nexus 7 and still have 23GB free.  Granted, I stream any media I want to play, so there is no storage being consumed by that.  For most people, 32GB will be more than adequate.

This one I consider to be huge.  The Nexus line of tablets and phones get their updates directly from Google, as they become available.  A lot of people won’t care about this too much, but its a big deal.  Security updates, bug fixes, feature enhancements will all make it to the Nexus devices.  While still not what I would consider acceptable, Google has a much better track record of supporting older devices than any other vendor.  Jessica’s first generation Nexus 7 is still receiving updates from Google and it was released two years ago.  Google has also stated that it will be releasing Android L for that tablet this fall as well, as well as the current generation of devices.

Samsung doing the same?  Not likely.  In my experience Samsung is more about getting new devices in people hands instead of maintaining their previous products.  Other hardware vendors take a similar attitude.  A product may receive a single update in its life cycle, provided its successor hasn’t been released yet, after that its very unlikely.

So, there you have it, my reasons for purchasing an “out of date” tablet.  Despite it being a whole year old, its still one of the best 7″ tablets you can buy right now.

The only thing that I wish it had that it doesn’t is an actual digitizer and stylus.  The rubber tipped ones are okay, but they don’t last very long, and they don’t provide the sensitivity or detail that the Samsung Note line has.

I intentionally omitted any mention of cameras.  Suffice to say that the front facing camera on the Nexus 7 is great for Hangouts or other video chat, but anyone who is using a tablet for taking pictures shouldn’t expect much.

A Footnote About Samsung

We’ve purchased a lot of Samsung products over the years.  Why?  In a lot of ways, Samsung has made the best product.  Samsung SSD’s are great, as are Samsung displays.  It is unlikely that we’ll ever be buying another Samsung tablet, phone, or TV again, though.  The reason is quite simple.  Samsung doesn’t actually seem to care about their customers beyond making the sale.  They have a yearly product release cycle, once the replacement product has been released, all of the millions of people that bought the previous generation are abandoned.   Phones and tablets don’t receive any updates, security or otherwise.  Want a new feature?  Buy our latest product.

Their build quality has also taken a nose dive.  We got Jessica a Note 2 around June of last year.  She loved that phone.  It was solid and well made, reliable and had a nice screen.  Two months ago, we decided to upgrade her to the Note 3 and give her Note 2 to a family member.  That was a mistake.  The Note 3 felt cheap, had all kinds of stability problems and was just straight up bad.  It suffered from lag, lockups and random program crashes.  It wasn’t just a bad unit, either.  There are  lots of other reports online about the quality (or lack thereof) with the Note 3.  It got replaced with an LG G3, but that will be the subject of another review.  I should also mention, that in the year that she had her Note 2, it didn’t receive a single update.  I guess Samsung was too busy working on the Note 3 and the soon to be released Note 4 to care about their millions of other customers.

Their early Android products were also great.  My Galaxy Tab 7.0 Plus is still in great shape and gets used regularly by our kids.  My “Vibrant” (aka the original Galaxy S phone) was still in use up until about a month ago.  With each new generation of products, though, Samsung seems to be more and more focused on profit than delivering good products.  This is fine, but I’ve decided I would rather have better products than what Samsung has been delivering these past couple of years.

I won’t even get started on what an abomination TouchWiz is.