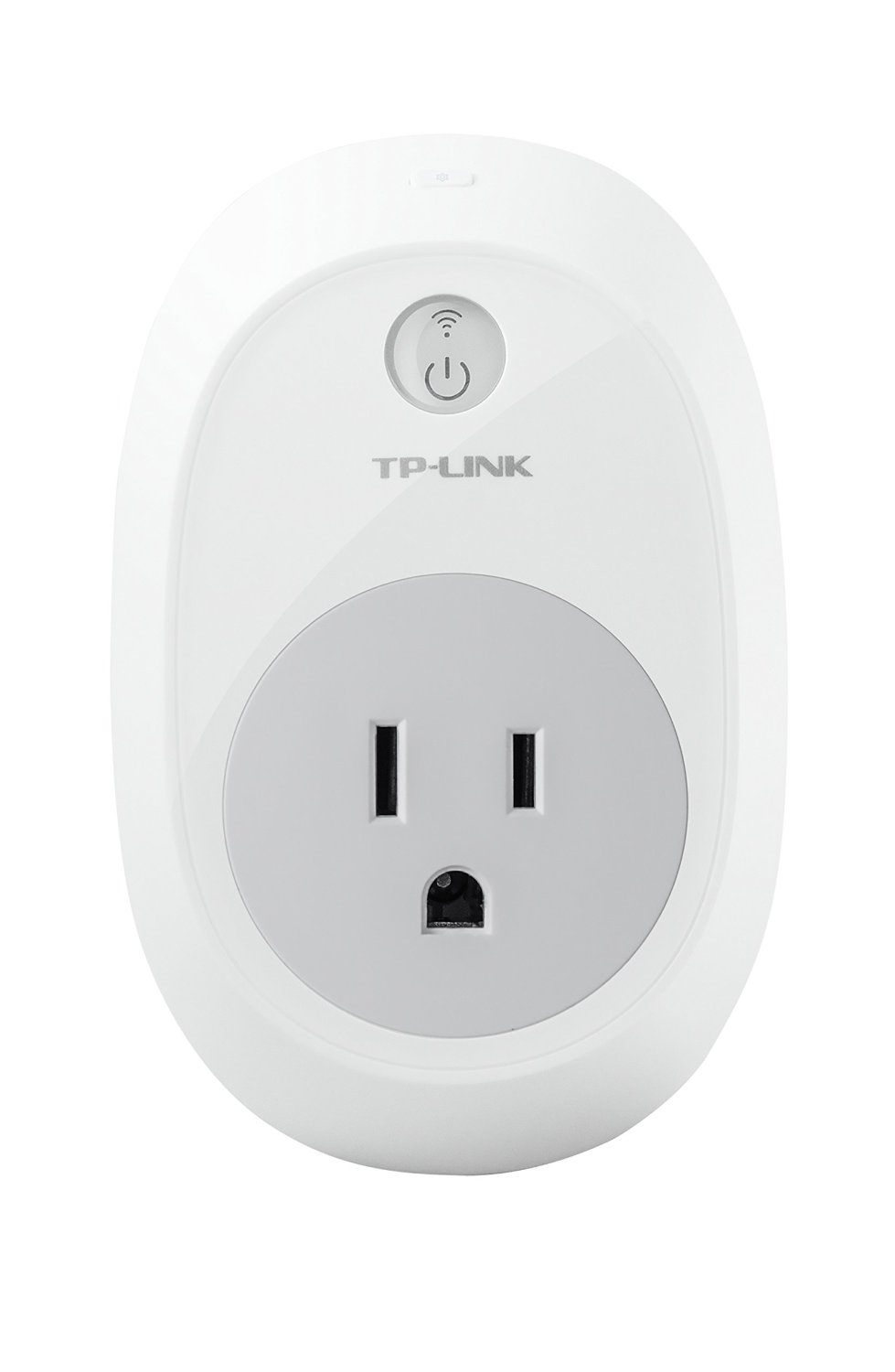 With Jessica not being nearly as mobile any more, we decided it was time to start looking into a little bit of home automation. To start, we decided to just add a couple of controls for our lights. The TP-LINK HS100 WiFi Smart Plug seemed like a good way to get started as TP-LINK makes fairly decent products and they’re significantly less expensive than most of the others.  The fact they say it works with the Echo makes it a no-brainer.

We’ve had an Amazon Echo since they were first available to Prime customers, and we use it daily.  It sits centrally located on the bar of our kitchen leading to our open living area.  We use it for timers, weather forecasts, conversions, the occasional news briefing and the kids love to have it tell jokes.  I wish it could play our music collection off our local network, but maybe that will happen some day.

It comes in a fairly small box that is mostly packaging.  The design is very simple and elegant and you wouldn’t really seem out of place.  It has two small LEDs under a small clear plastic circle in them that are green or amber, and do different things depending on the status.  There is a very small reset button on the very top of the unit.  Its doesn’t really stick out and is barely noticeable.

It is fairly thick, though — a full 2 inches (5cm).  Its pretty chunky.  Also, the rounded curve on the bottom makes it so that it will at least partially obstruct the outlet below it.  I was able to get a standard plug into the outlet below, but don’t expect to get a wall-wart or other transformer in the same outlet with the HS100.

Aside from the chunkiness, it is not at all unattractive.  This isn’t really a huge issue for us, we have white outlets so it kind of blends in.  Its also behind furniture so its really not something you’re going to see every day.

Setting it up is extremely simple.  First, download the TP-LINK Kasa app from the Play Store.  Its not yet available from the Amazon App Store, so you won’t be able to use it easily from your Kindle Fire just yet.  When you first launch the app, you’re given the opportunity to either sign in or create a new “cloud” account with TP-LINK.  Just what everyone needs, yet another cloud account.  However if you want to integrate it with the Echo, then you must be signed in before you setup the Smart Plugs.   If you don’t sign in, you will not be able to control the HS100 without using the Kasa app while signed in on the same WiFi network.

Next, plug in the HS100 and wait for the green and amber lights to start alternating.  Start up the app and it will guide you through adding it to your wireless network and naming it.  Provided you are signed in to the TP-LINK cloud account, this will also give you the option of being able to control it remotely.  Make sure this is enabled if you want to integrate it with the Echo.  Its extremely easy, and the Kasa app guides you through every step.  The whole process takes under 2 minutes per device.

Repeat the process for each of the HS100s you’re adding and you’ll end up with a nice looking list in Kasa where you can easily turn on and off the plugs.

This is where things are not quite so simple.  Ideally, after using the Alexa app to add them to the Echo, you would just be able to say “Alexa, turn on light one”.  But because you have to add them via the “Skills” app, its not nearly that straight forward.  TP-LINK has an excellent guide to add the skill to Alexa which I followed and it worked without any issues.  You do need to give Alexa your TP-LINK cloud credentials, and once done, they’re linked.  If you didn’t create a TP-LINK cloud account, you won’t be able to add the skill.

You also have to use “Alexa, ask Kasa to turn on light 1”.  It would be much better if it were integrated directly like some of the other home automation devices.  If I were to purchase another brand of device, I’ll have to remember which device controls which outlet.  This could make it fail the WAT (Wife Acceptance Test).  Since TP-LINK only makes outlet controls at this point, this could be a sticking point.  For example, to turn on the kitchen light using an Insteon device, I could simply say “Alexa, turn on the kitchen light”.  Since the TP-LINK is setup as a skill, I have to tell Alexa to use that skill and say “Alexa, ask Kasa to turn on light 1”.  It may not seem like much of a big deal, but consistency is key for things like this to be truly useful.

If you’re looking at an inexpensive way to add a basic way to turn lights on and off via your smartphone or tablet, then the TP-LINK HS100 WiFi Smart Plug is a fairly inexpensive way to go.  Setting them up is easy and the app works very well.

If you’re looking to integrate them with the Amazon Echo or anything else, though, you might be disappointed.  It works through the Echo skills, but is inconsistent in the commands you would normally give to the Echo.  Hopefully a software update either from the Echo or from TP-LINK will address this in the future, but for right now, its not there yet.

I’ll likely try out one of the other competitors, the additional cost is worth the ability to simply speak to turn on or off a light without “asking” a skill.  If there are any improvements in the integration, I’ll revise my review to include them.