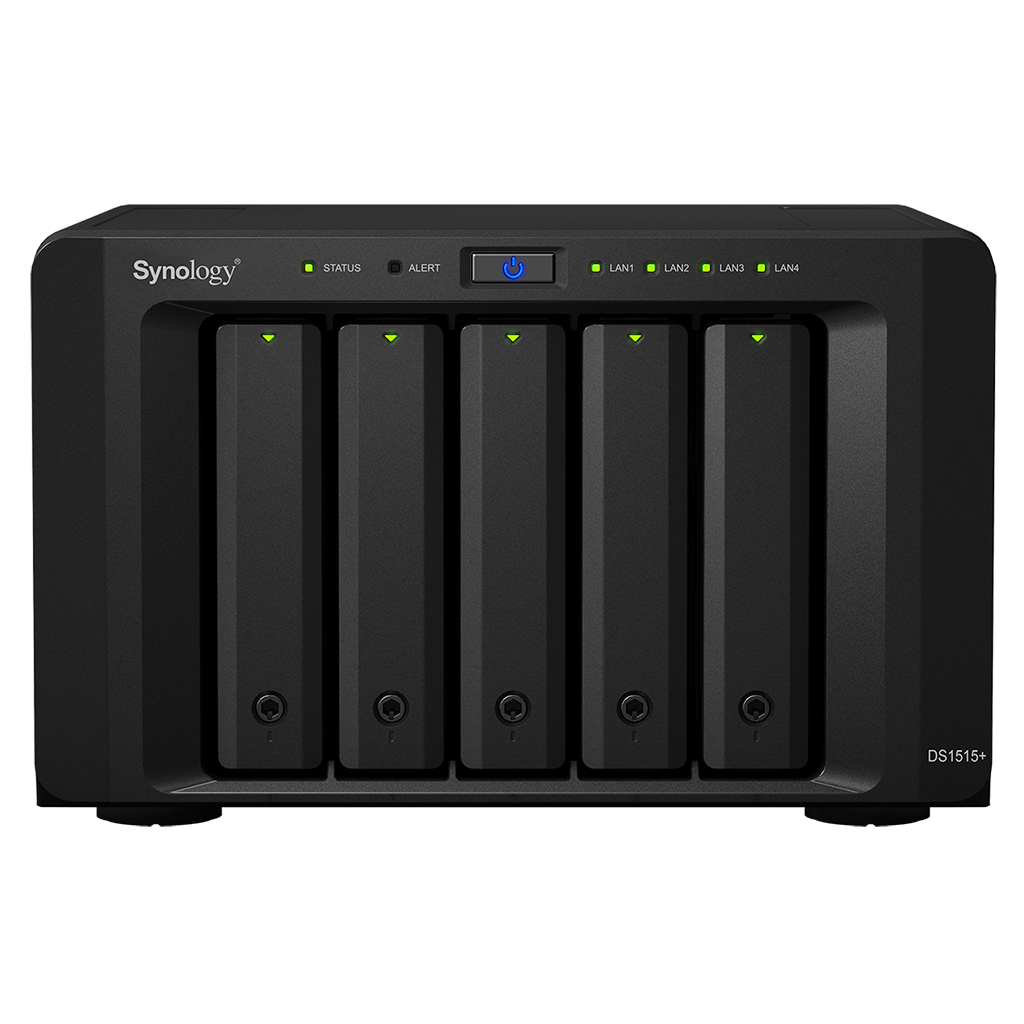 So you’ve got a lot of videos, home movies, pictures, etc., that you want to have access to from all of your devices and get them on your big screen.  Sounds simple, right?  Its anything but.  With the huge amount of competition and proprietary solutions out there it can be very confusing and extremely frustrating trying to figure out what the “best” solution is.

With this post, I’ve decided to do things a bit differently.  Since backend storage is a huge topic with dozens of different options I’m going to put where I ended up first, and how I got here afterward since this will be a long post.

I ended up choosing a Synology DS1515+ for centralized storage.  Its loaded up with 4 6TB NAS hard drives (2 HGSTs, 1 Seagate and 1 WD Red) and a 480GB SanDisk Ultra II SSD for caching.  The hard drives are configured using Synology Hybrid Raid (SHR) giving me just under 16TB of usable space as a single volume.  The SSD is configured as a read only cache on the 16TB volume.  I also added an additional 8GB of RAM in the unit.

By choosing the DS1515+ over one of the media oriented models, I can expand the array in the future with one or two Synology DX513 expansion units allowing enough storage capacity for quite a few years to come.  Adding the expansion unit would also allow me to add another SSD and enable write caching as well, increasing performance further.

The Synology NAS products also include a well rounded suite of apps. The apps include DS audio, DS photo, DS note and DS file.  These apps allow you to have much greater control of your media than any of the other online storage options.  The Synology also has the ability to backup to various cloud services or to another Synology over the internet, which is what I’ve done.  After using the Synology for a few weeks, I ended up purchasing another one for my office.  They act as backup destinations for each other.  Just to be completely safe, I also backup to external hard drives as well.  The Synology software makes all of this fairly easy to do.

Its not the cheapest solution you can build, but it is a pretty solid one.  It does have its quirks, but overall it performs exceptionally well for a home or small office.

How I Arrived at the Synology Solution

When we first started doing this 7 or 8 years ago, I had a couple of 500Gb hard drives that I put into a server and we used that. Our house was networked, so, it was pretty simple.  I used a UPNP Media Server to serve videos to our D-Link and NFS shares for the Myth Frontend.  For anything important, I backed it up to an external drive.  This was okay for a while.

As we started using MythTV’s recordings more and more, and had more and more home videos as well as all of our ripped DVD’s, things quickly started running out of capacity.  Having things scattered across hard drives works, but its a pain to manage.   Using RAID helps, but expanding a RAID array is not a simple chore, either.  For this, I ended up buying a large case that held 8 hard drives and re-purposed an older motherboard for it.  It worked pretty well for a UPNP server and acting as a MythTV backend server.

When we were living in a large house in Washington, it worked well.  It stayed out of site in my home office.  After having our first child (a big surprise to be sure), and getting some news of my parents failing health, we moved back to California to be near family.  Initially, we went from a 2300sf house to a 915sf condo as we got ourselves established down here again.  The condo was a great investment as we had our second child and searched for a house that met our needs.  Surprisingly, the condo had a good place to put the giant server, so we kept that running for another year and a half.  I used a Zotac mini-PC for a Myth frontend that was hidden behind the TV, and a Roku 3.  I connected everything together with a Zyxel Powerline Ethernet kit.

About 2 years ago we bought a new house and sold the condo.  The new house is much larger, but it has a very open floor plan.  There isn’t a good place to keep a large server.  The bulk of the living space is basically one giant room.  Since this is a common space, a large server simply wouldn’t look good or work.

So, I attempted to replace the large server with something quite a bit smaller and more discreet.  This endeavor was met with a lot of frustration and I ultimately gave up as it simply wasn’t worth it.  Using a small form factor motherboard, and a SilverStone Mini-ITX chassis that held 8 3.5″ hard drives, I was attempting to have a server that held everything, looked nice, was small, and was able to run the MythTV backend as well as a Plex server.  I chose an i3 low power CPU and bought all the parts.  I had two bad SATA backplanes in two different cases, so I decided this case and combination wasn’t going to be reliable enough for me.  The noise and the heat were also not as low as they should have been.  It was a good idea on paper, but it wasn’t that great in reality.

Next, I decided to do the same thing, but with a media center case that I could put in the entertainment center.  Doing this it could also act as a Myth frontend.  I took the i3 and motherboard and put it into a Fractal Design Node 605 case.  This only gave me 4 drive slots, so I put in two 2TB Western Digital Red drives and two 4TB HGST drives, and a 240GB Intel SSD as my boot and database drive which I had secured to the inside of the case with velcro.  This machine served as a MythTV backend and frontend, as well as a Plex server.

This also worked fine for a while, until a disk filled up.  Since I wasn’t using LVM or RAID on the disks, that meant moving things around.  That was a pain.  Heat and noise were also an issue, though a minor one.  The Node 605 has a lot of noise dampening features to it.  It also seemed like overkill for what I was using it for.  Granted, it could easily handle a few Plex streams at a time while recording two shows, but it mostly sat idle.  It also didn’t address a few of the other things we’d wanted the central server for: pictures and music.  Plex is only just tolerable for music and photos, and misses a lot of the features we wanted.

So I kept looking.  Finally I saw a sale at Amazon on something I’d been eyeing for a while — a Synology Diskstation model DS-1515+.  So I did a bunch of reading on it and bought one.  I also bought a mixture of 6TB NAS hard drives, two Western Digital, one Seagate and two HGST.  I also bought an additional 8GB of memory for it.  I decided that if I was going to do this, I was going to do it right.  I got it all setup and configured with the five drives in RAID 6 mode.  That gave me 18TB of storage and allowed for two drive failures.  Yes, this was overkill, but I’m paranoid.  The Synology is also small enough that I was able to put it on the top shelf of the coat closet where the rest of my networking gear is.  I ran things this way for a while.  Things were a bit slow for me, though, specifically writing new files to it.  I was only getting about 50Mb per second writing, which is painfully slow to add new things to, and less than half the capacity of the Gigabit network.

The Synology DS1515+ is not quiet.  It is not suitable for putting near your TV or where people would be bothered by the noise, Synology has other models that are more suited to putting near your TV.  Up in a closet it works well, especially our closet — it sits just a few feet from our HVAC return and our whole house fan intake vent, so for us the temperature doesn’t reach worrisome levels, since its in a hallway closet, we don’t hear it when we’re in the front room, even with hardwood floors that echo.

The Synology can also run a Plex server or an Emby server to serve directly to our tablets or the Sony Android TV we picked up last year on a Black Friday deal.  It also has a bunch of very good apps for Android and iOS, including apps for music and photos that are both extremely usable.  They’re not as advanced as some other offerings, but they’re quite good and usable and it keeps all your music and pictures under your control and not a third party, which has its own sets of advantages and disadvantages.

As I mentioned before, I ran the Synology for a while with RAID-6.  Things ran fine, but were a bit slow.  Not so slow that I couldn’t live with it.  My mind got changed about that though.  After running a few weeks with the Synology, I bought another one for my office to replace my small Netgear NAS that I used for backups.  When I configured this unit, I configured it as RAID-5 and also added an SSD Cache to it.  The SSD Cache makes a HUGE difference.  Its hard to measure, but I noticed an immediate improvement in loading thumbnails and small data from the music and photo apps.  Its not about read speed at all, since its pretty easy to saturate a GB network connection, its about seek time and finding smaller objects such as album art and media thumbnails.  These types of lookups are noticeably improved.  If I were to add the DX513 expansion unit and another SSD, it would also be able to do write caching, which would also speed things up.

After setting up the unit at the office, I ended up switching to RAID-5 and an SSD cache at home as well.  Things work extremely well, and the unit is very responsive.  The apps are excellent and I’m quite pleased with it as a whole.  It is by far the best storage solution I’ve had to date for the home network.  Because I have Synology units at home and the office I have them configured to backup to each other over the Internet also.

A Synology DS1515+ loaded up with the following components:

My next post in the series will cover all of the different media front-ends that we’ve tried over the years and where we’re at now.  I’ll include how it utilizes the Synology for storage and how I’ve got things working across all of the devices we use.

2 thoughts on “Who Shall Control My Media? Part 4 – Backend Storage”