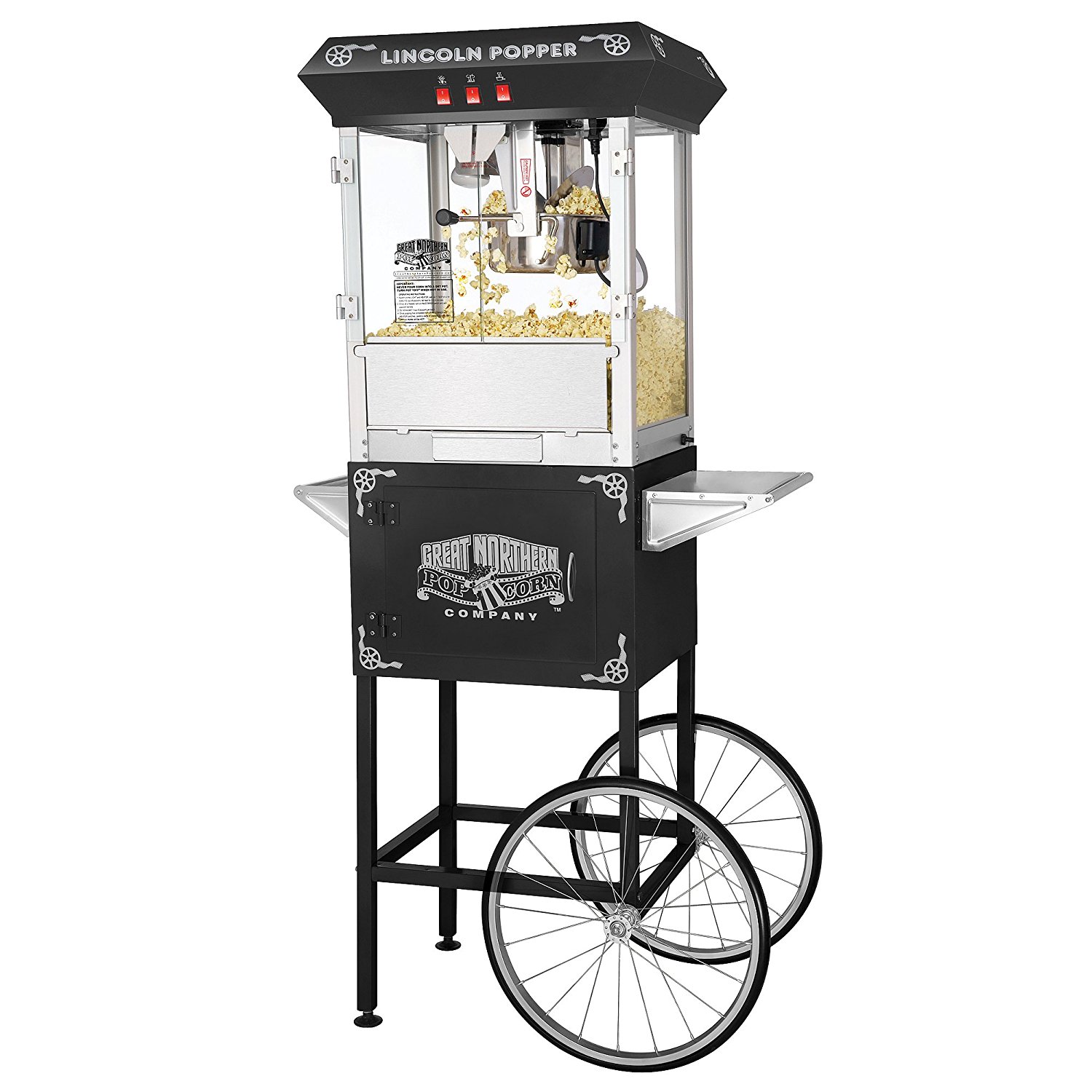 I love popcorn.  Always have.  Its one of those things from childhood that provides fond memories and an overall sense of happiness to me.  My boys also love popcorn.  About once a month we do a “movie night” where we spend a Saturday afternoon watching a movie, having a “carpet picnic” and all watch a movie together.  Our movie nights are one of those things that I hope will provide that same sense of happiness to my kids when they are adults.

In the last 15 years, we have gone through several hot oil popcorn makers, with each having its own advantages and disadvantages.  The last one was a basic stirring model that could make a decent amount of popcorn.  The butter wells on most of them are all but useless, so you have to add butter after the fact.  The popcorn oils you can get at the supermarket do a fairly good job, but the Orville Redenbacher’s butter flavored oil is a good choice for every day use.

We’ve tried various brands of popcorn, too.  Some of the best popcorn we’ve ever had was from Fireworks Popcorn.  The problem we had was the last few batches of their popcorn wasn’t that great.  More than half of the kernels didn’t pop, and what did pop was much like eating packing peanuts.  We ended up doing what we usually do these days, and just microwave a couple bags of Costco’s Kirlkland brand popcorn.  Its not the best, but its fine for a movie night.

After that last popcorn failure, Jessica and I talked about it and we decided to take our household’s love of popcorn to its logical conclusion.  So I did some research, like I always do.  We ended up buying a Great Northern Popcorn Lincoln Popper with stand and called it a Christmas present to me.  We ordered it and it arrived the day after Thanksgiving.  The timing was perfect as my oldest son’s birthday party was scheduled for the following Saturday and we were having it at home.  What kid doesn’t love popcorn and pizza at a birthday party?

The Popper portion of the Lincoln Popper by Great Northern

Setting it up was pretty straight forward.  You only need to assemble the cart portion of it.  They provide two very thin wrenches for this.  I highly recommend using an actual wrench if you’ve got it, though.  It can be done with the included ones, but your fingers will hate you afterward.  The cart itself is a bit wobbly once assembled, but its not designed for off-roading with it.  Its plenty stable to leave in a media room, or like in our house, in our kitchen near our “kitch wall”.  For the main popper unit, it is pre-assembled.  All you need to do is hang the doors and put the unit on the cart.  The popper is held in place with four spring loaded pins that secure it to the cart very well.

Once its all put together, you’ll want to run a batch or two through it to season the pot and eliminate the “new electric appliance” smell.  For the first four or five batches of popcorn you pop, I strongly recommend popping them outside.  There will be a lot of oily steam coming out of the unit and the smell and it will quickly become overpowering, even choking.  After doing more than 10 batches in ours now, I still wheel it into the garage to pop it just to keep the whole house from filling up with the oily steam for hours.  Even if you love that smell, popping it outside and wheeling it into the house will still give your house that freshly popped popcorn aroma, but it won’t be so thick you choke on it.

I started out with the pre-measured popcorn packs sold by Great Northern.  I chose the 8oz pack and Amazon has the best price on it currently.  Its all pre-measured and easy to use.  Put the oil in the kettle, let it heat up for about 3-4 minutes until there is a good amount of steam coming from the pot, then add the seasoning and the kernels.  Close the lid and within 5 minutes you will have fresh popcorn.  The whole popping process takes about 10 minutes for an 8oz batch.  The pre-measured packs make it very convenient.  The popcorn tastes a lot like that you would get at Target.  Its not quite movie theater popcorn, but they also put a lot more salt and butter flavored oil on theirs.  The Great Northern popcorn also doesn’t sit as heavily on your stomach in a nauseating way like movie theater popcorn does if you eat too much of it.

Now, its not all praise for this machine.  About one in three batches I’ve had a popped kernel get stuck under the stirring arm.  This causes the arm to not move and grind a bit, or stops it completely.  At that point, you have to shake the pot to try to get it loose which I’ve only had success with once.  The other times, you have to turn off the stirring arm, wait for the last of the popcorn to pop and dump it out.  This also means you lose a portion of the batch, some of it is burnt and you end up with a bunch of unpopped kernels in the popcorn.  I’ve found that getting a scoop with holes in it helps a lot — gently shake it as you’re scooping and most of the unpopped kernels will drop out and not make it into your bowl or bag.

I don’t know if our pot is defective since I haven’t seen anyone else mention this issue. I”ll be calling Great Northern and bringing it up with them after the holidays are over, and I’ll update this post with the result.

Even with the annoyance of the popcorn getting stuck under the stirring arm, I have no regrets over the purchase.  Its makes very good tasting popcorn — way better than the taste of microwave popcorn.  Considering a batch from this machine only takes about 10 minutes to make, the extra time is well worth it.

The machine is also a great conversation piece.  Everyone who has come into our home since getting it has commented on it in a positive way.  They think we’re a bit strange for it, but at the same time expressing a bit of envy.  Every kid at my son’s birthday party had at least two servings of popcorn and loved it.  Its already started building great memories for my kids.

I love popcorn.  Always have.  Its one of those things from childhood that provides fond memories and an overall sense of happiness to me.  My boys also love popcorn.  About once a month we do a "movie night" where we spend a Saturday afternoon watching a movie, having a "carpet picnic" and all watch a movie together.  Our movie nights are one of those things that I hope will provide that same sense of happiness to my kids when they are adults. In the last 15 years, we have gone through several hot oil popcorn makers, with each having its…
Great Northern Popcorn Lincoln Popper Review
Great Northern Popcorn Lincoln Popper Review
marc
A good popper overall. It looks nice in the kitchen and is a great conversation piece.

A good popper overall. It looks nice in the kitchen and is a great conversation piece.