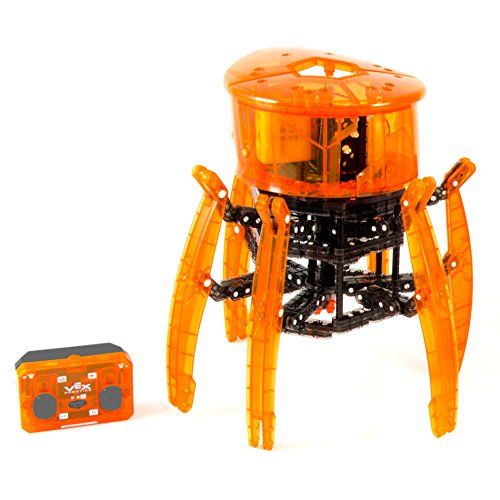 Our oldest son has been wanting one of these since he first saw them.  We’ve got several of the HexBugs already, including HexBug nanos, beetles, spiders, larvae, fish and tarantulas.  He also loves Lego and K’nex toys.  Imagine how excited he was when his sister got him the Vex Robotics Spider for Christmas.  It was the first thing he wanted to open and build because BIG, ROBOT, BATTLE.

We’re big fans of the HexBugs, they’re awesome little toys with a good longevity.  They’re easy enough to play with and control but still have that “cool” factor.  His 3 year old brother can even play with them, which makes them even better as toys they can play with together.  Not that playing together works out the way either of them wants or expects, but memories!

The day after Christmas, he and his mother started building this massive robotic spider.

The Mom here.  Let me start by saying I literally beg both kids to let me build their whatever while they’re elsewhere doing whatever.  I’m a, self acknowledged, person that has had children so she can have the childhood she wanted once she became an adult.  Don’t judge, you know you really want the toys too.

That being established, let’s talk packaging. Lego is a genius of sorts with how they bundle all these random pieces and parts and use a vague Bag 1 or Bag 3 label.  Hexbugs has no such class with this battle bot.  Instead, when you gleefully open the box you’re confronted with no less than 8, possibly more or less, my head was reeling, unlabeled bags.  Yes, UNlabeled bags.

Let’s spend a moment contemplating what a wanna-be evil genius could do with UNLABELED bags that are intended to build something that battles.  You should be scared.  I scared myself.

So there I am, pretending to be a capable mature adult, confronted by bags that are not labeled.  I did the only reasonable thing; I opened the freakin instructions and read Step 1.

As our son and I, yes he was included, went through the steps we got so frustrated by having to search through the myriad of bags for the part(s) needed.  Seriously, even our three year old knows to separate the Transformers from the Paw Patrol toys, how is it this company selling a bloody expensive DIY robot can’t figure out this basic concept?!  Who were their parents?!

I digress, we spent a bunch of time *cough* just finding the right part.  We miscalculated since there’s all of TWO pegs that are a sneeze longer than the plethora of pegs that look just like them, and I got irritated and combined all the small pegs.

So, we built this mammoth behemoth over the course of about five hours between my adult daughter and me.  And we got it mostly right except that one peg that was a fart longer than the others.  Once Dad got home I handed off the finishing touches to him, because bonding (and frankly I’d had my fun and was done.)

Mom now signing off to drink her wine.

The packaging of the parts leaves much to be desired.  There are many small parts that look almost identical — the only difference being only a few millimeters in length.  These parts were separated out in different bags, but none of them were labelled.  This wouldn’t be so bad, except that there are literally hundreds of pegs in the bags.  They should be labelled as to which steps you’ll be using them in.  In the instructions, they could have very easily said “Peg A from Bag A.”  All of the plastic parts of the spider are connected together with these pegs.  Get one peg wrong and you’re going to have to tear apart what could be hours of work and hope that you get it right the next time.

The hours of work part is not an exaggeration either.  It took my wife and son several hours to build the spider.  One peg on one leg was wrong — a peg that was less than 2mm longer was used on accident.  It took over an hour to disassemble things and put them back with the correct peg.  These things are not easy to build.  Some of the pegs and parts snap in extremely tight, so tight that my wife had to use tools to get them in place.  Our son was completely unable to snap them in.

A big part of the fun of these types of toys is in the building of them.  You get to see your creation start to take shape and that inspires you to continue on with enthusiasm.  I wish that enthusiasm was as great with this model.  Because of the sheer number of pegs that you need to use to hold everything together on this thing, the attitude changed from enthusiasm to frustration about half way in.

After the team effort of (finally) getting it all put together and ready to turn on is when the real disappointment struck.  The gear box is horribly designed.  I love the concept of teaching kids how gears work, and how smaller gears that move larger gears can generate a significant amount of force — enough that a small motor can move the legs of this mammoth spider.  This wasn’t the case however.  The gears box on this particular model should have been built with actual rivets and not plastic pegs.  The pegs simply can’t handle the stress of trying to move three spider legs and they start grinding and then pulling themselves off of their pegs.

The Vex Robotics Spider seems like it would be an awesome toy, but falls short in many ways.